Clap...Peal...Rumble and Roll....
Why Does Thunder Sound So Different From Time-to-Time? 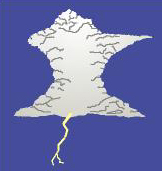 As we have said there are two kinds of exhalation, moist and dry; and their combination (air) contains both potentially. It condenses into clouds as we have explained before, and the condensation of clouds is thicker towards their farther limit...But any of the dry exhalation that gets trapped when the air is in the process of cooling is forcibly ejected as the clouds condense and in its course strikes the surrounding clouds, and the noise caused by the impact is what we call thunder.
Aristotle (384-322 B.C.) Meteorologica.

In the first place the blue of heaven is shaken with thunder, because the ethereal clouds clash together as they fly aloft when the winds combat from opposite quarters.
T. Lucretius (98-55 B.C.). On the Nature of Things, Book VI.

...waterie vapour by the coldnesse both of place and of matter, is thickened into a clowd, and the exhalation (which was drawne up with it) is shut within the clowd, seeking some passage out. This hotte exhalation flying the touching of the cold clowd, doth flie into the depth of the clowd...it maketh a way by force, and beeing kindled, by the violent motion it breaketh through the clowde...then there is made both thunder and lightning...
Simon Harward, 1607. A Discourse of the Severall Kinds and Causes of Lightnings.

...the sound which is known as thunder is due simply to the fact that the air traversed by an electric spark, that is, a flash of lightning, is suddenly raised to a very high temperature, and has its volume, moreover considerably increased. The column of gas thus suddenly heated and expanded is sometimes several miles long and as the duration of the flash is not even a millionth of a second, it follows that the noise bursts forth at once from the whole column, though for an observer in any one place it commences where lightning is at least distance.
M. Hirn. The Sound of Thunder, Scientific American, 59:201(1888)
Note: The first correct explanation of thunder.

Thunder is good, thunder is impressive; but it is lightning that does the work.
Mark Twain (1908).

Animation of a Shock Wave in the Air

The speed of sound varies with air density (slower with greater density) but is often taken as 330 meters/second (about 738 mph), therefore it travels about 1 kilometer in 3 seconds (1 mile in 5 seconds).

The light from lightning travels about one million times faster and the light of even distant lightning reaches your eye in a very small fraction of a second. Light travels 300,000,000 meters per second (300 million) or more than 186,000 miles in just a second. If a lightning bolt was just 2 miles away, the light would reach your eye in .00001 second (1 one one-hundred thousandth of a second) almost instantaneously but it takes 10 seconds (one million times longer) for the sound to arrive.

Movement of a Shock Wave Away from a Lightning Bolt

The movement of a shock wave is not quite as simple as indicated above, but from the above animation you get the general idea, rapidly heated air expands and compresses the surrounding air, creating a shock or pressure wave that travels away from the lightning bolt. 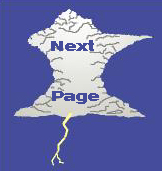