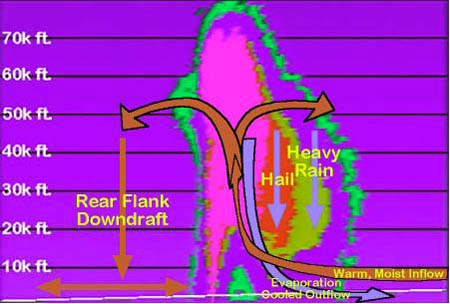 1.Warm, moist air fows into the thunderstorm and is lifted by the updraft and by the cool outflow
2. As some rain evaporates, air in the front portion of the storm is cooled and becomes more dense the increased density along with billions of rain drops pushing air ahead of them leads to the downdraft, the cool outflow we have all experienced.
3.The inflow splits, towards the front as the updraft becomes more horizontal the raindrops and hailstones are no longer held aloft by strong upward motion. Because hail is heavier it falls out closest to the updraft, raindrops are carried farther and fall farther towards the front of the storm.
4.The portion of the updraft that exits the rear of the storm, sinks as the rear flank downdraft. This leads to clearing in the rear of the storm. This is why tornado photographs often show a dark funnel against a serene, bright sky.

Buy the time the video frame above was captured over Ft. Mitchell, KY the funnel had formed but had not touched down. As the storm moved almost due east it reached southern Clermont county and the funnel touched down just a few miles WSW of Felicity, OH.

For more on gust-front tornadoes and supercell tornadoes ****CLICK HERE****

BACK TO TORNADO INDEX

BACK TO STEVE HORSTMEYER'S HOME PAGE